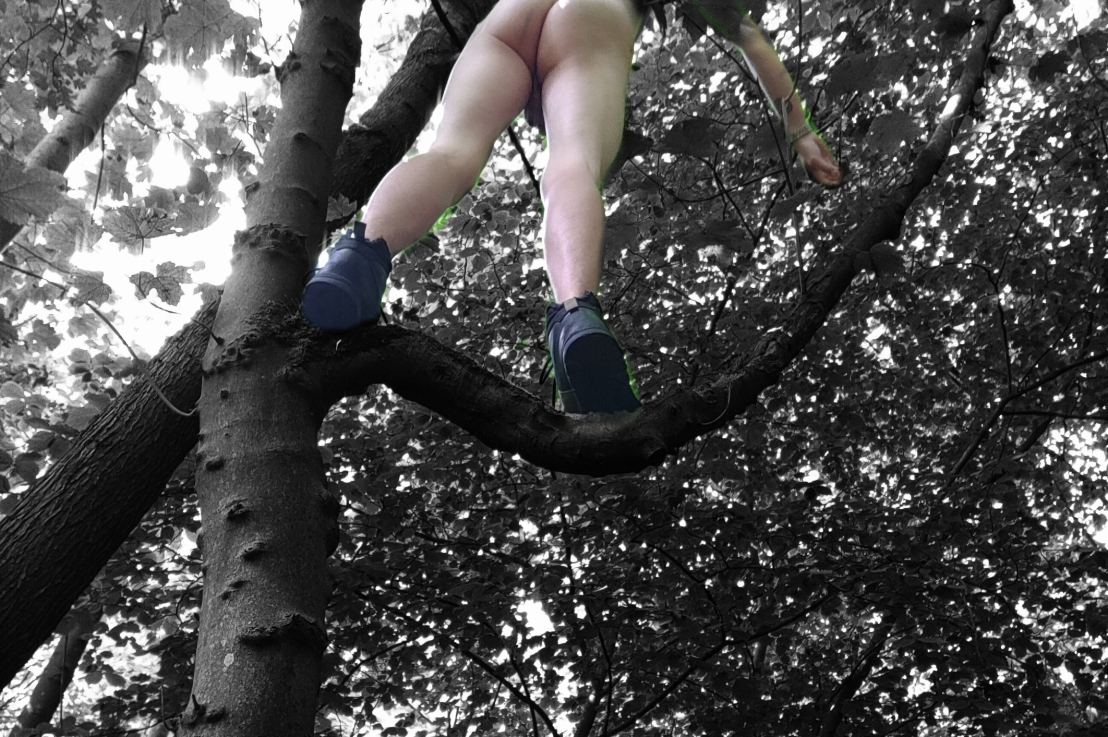 Compliments are the topic this week for #SWAP, and while it’s not something I’d think about or write about as a standalone post I have enjoyed thinking about it and getting the thoughts for a post knowing it’ll be linked to the swap meme.

The first part of the prompt post states the following:
“I was reading a post on Reddit where someone had asked what is one thing guys never tell women and one person said the fact that if you compliment him he’ll remember it forever.”

The above answer for me is 100% true and while I may not remember exact compliments I will always remember those that give them as it means a lot to me whenever I’m complimented.
Now, these compliments can come in various forms, even ways that I might consider compliments in a roundabout way even if it wasn’t intended as a straight-up compliment.

The best compliments for me are those that go deep, where someone has noticed things I’ve done, the things I do where I’m not looking for compliments but just being myself and where it may not be a typical compliment.

Since I started blogging I’m sure regulars to my blog/Twitter will have seen lots of changes with me, and I remeber last year being (complimented?) in a way about how far I’ve come by i’m sure it was Floss of all people. I don’t know if she was complimenting me as such or just being nice, but it felt good to know she was noticing me, what I was doing and how far I had come personally/blogging because it’s one thing to see it through my own eyes but another to have someone else notice it too.

At the same time this wasn’t a singular thing that you might compliment someone on or that I might look for compliments on say a blog post or photo I posted which made it all the more special.

I do also enjoy when my blog content gets complimented on especially photos and specifically on one semi-recent photo that was included in a Sinful Sunday round-up .
The photo in question was a very sexual one, and for me these are not something I feel comfortable doing a lot as I lack the confidence to really know what I’m doing (I feel my lack of expereince IRL doesn’t help) but having liked the photo enough to post it I was initally just happy to be included in the round-up but then even happier to read the compliments which ended with “Just an A+ lewd!”

Outside of blogging I love the compliments I get for just be me, for being nice and lovely, for being appreciated at work or for the time when I shaved my head and a colleauge said nice things about it.
I don’t do these things for compliments which makes it nicer when they do come because it’s always somewhat of a suprise.

On the other hand I sometimes can’t take a compliment and one example is the blog.
I started the blog because of the toy reviews I did for littleswitchbitch’s blog and I’ve always given compliments talking about how she and the toy reviews helped me get to where I am with my blog, and it’s always been countered with the argument that it was all me that did it and not her which can be true.
I always maintain that she helped me get the blog going, she was one inspiration for blogging and how grateful I was to her getting me into writing reviews which I enjoyed especially just the writing as much as the toys themseleves.

Another example is the photo below I posted where I climed up a tree and was asked “How I managed to combine taking a photo with a timer- and not just that, taking a well constructed, interestingly framed photo- with climbing up a bloody tree.”
Of course I was grateful for the compliment but rather than accept it and look at the fact I was being complimented because I had “climbed up a bloody tree” my response was something like “oh, you just have to be limber” downplaying the compliment.

Multifaceted is a great word to describe me and the types of photos I take.

On the one hand, I love a lot of not vanilla things, like kink and taking photos with my kink gear as well as really going for various HDR and B&W edits on my photos, which can give them a certain look.

Today on the other hand is where I lean into my vanilla side, then part of me that has a desire sometimes for anything that isn’t kink and is much softer not only IRL but in my photos.

As it also happens to be hump day I had to go with a butt shot that I like as part of vanilla me, different from the last few days with a lot more colour in the edit I went with.

I took a trip outdoors, stripped fully naked and had a little workout under the trees.
What better way to work out than having the warm sun shining through the trees, and nothing but the sounds of nature around me.

Green are the leaves as I stand amongst the trees which surround me while I’m both collared and clamped. 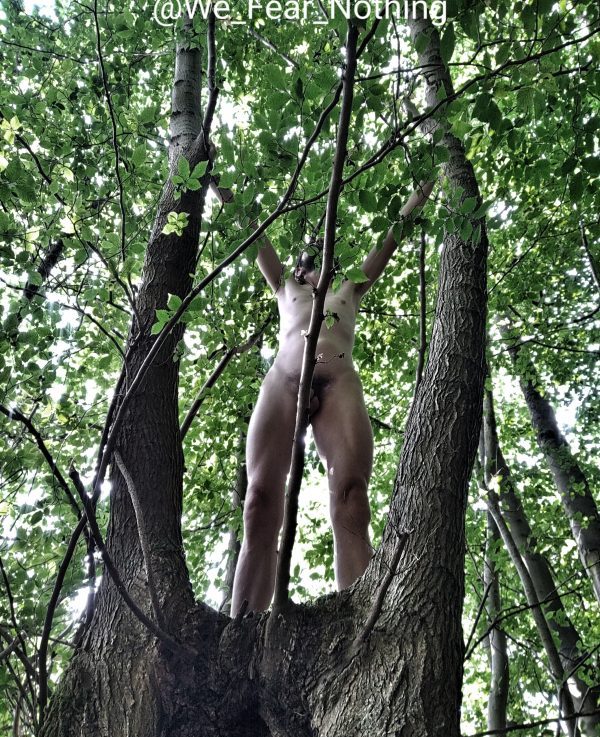 Standing there with my outstretched arms I am blending into nature and becoming one with it.
I’m afforded the freedom to be fully nude and embrace it, all the while admiring the beauty around me.

I hear the birds singing and see the sun breaking through the leaves, these are just some of the beauty within nature. 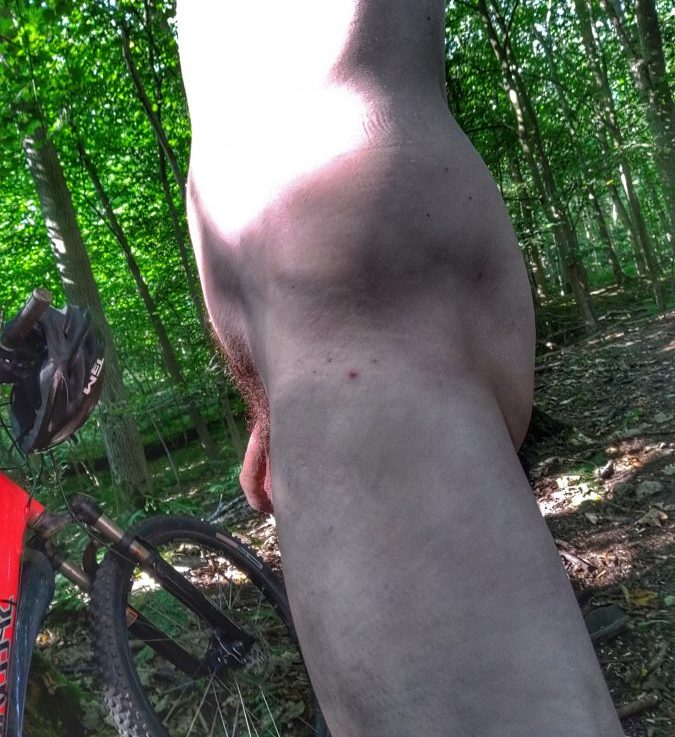 I got out on my bike the other day and explored some lesser used wooded areas.

Didn’t exactly cycle there naked, but while I’m in the woods on my own why not strip off and be at one with nature. 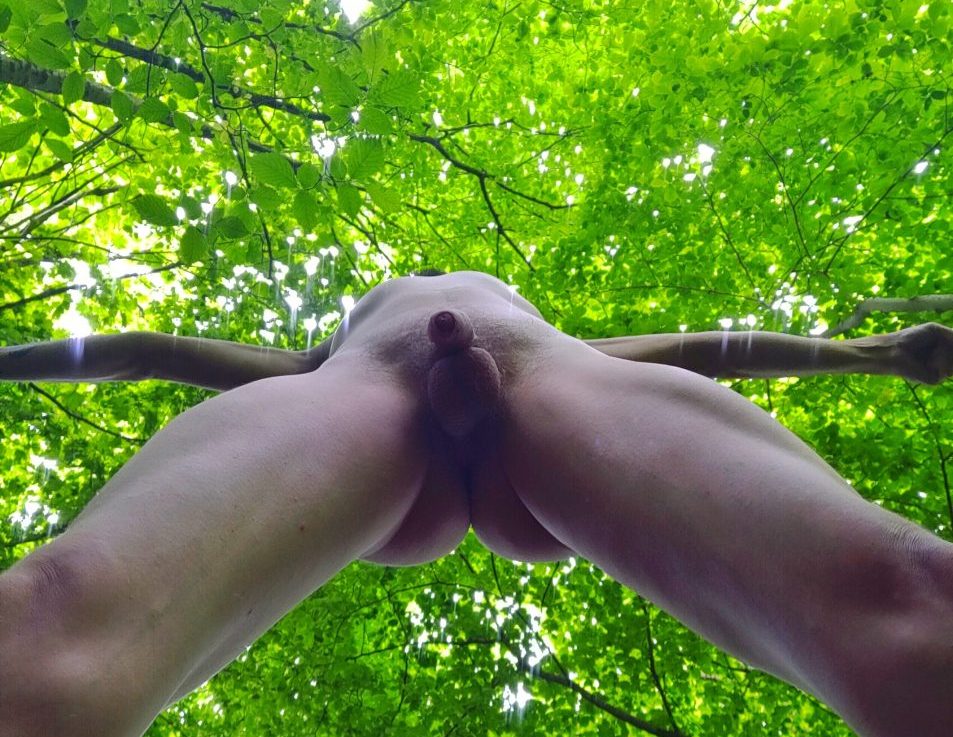 I stood there nude in the woods, the sunshine splitting through the trees for a good 15-20 minutes, with a sense of freedom about me and I felt at one with nature.

K is the prompt and having shot in my kilt previously for the triptych prompt I decided to lose the kilt. 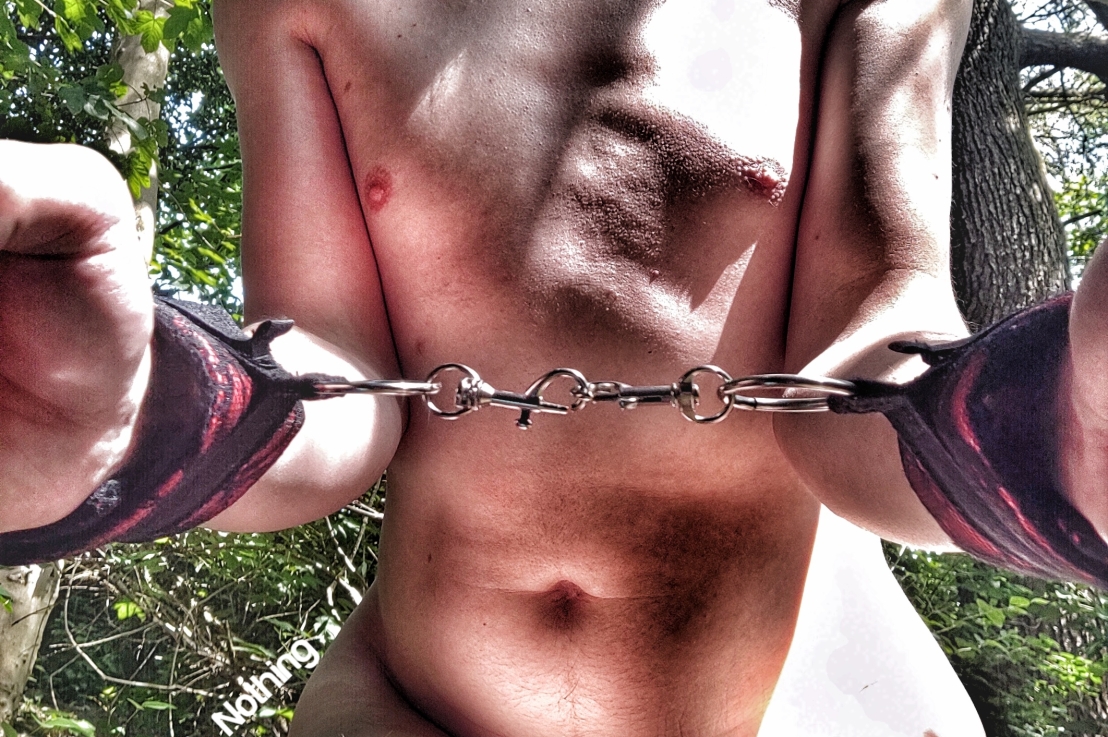 “And on your knees